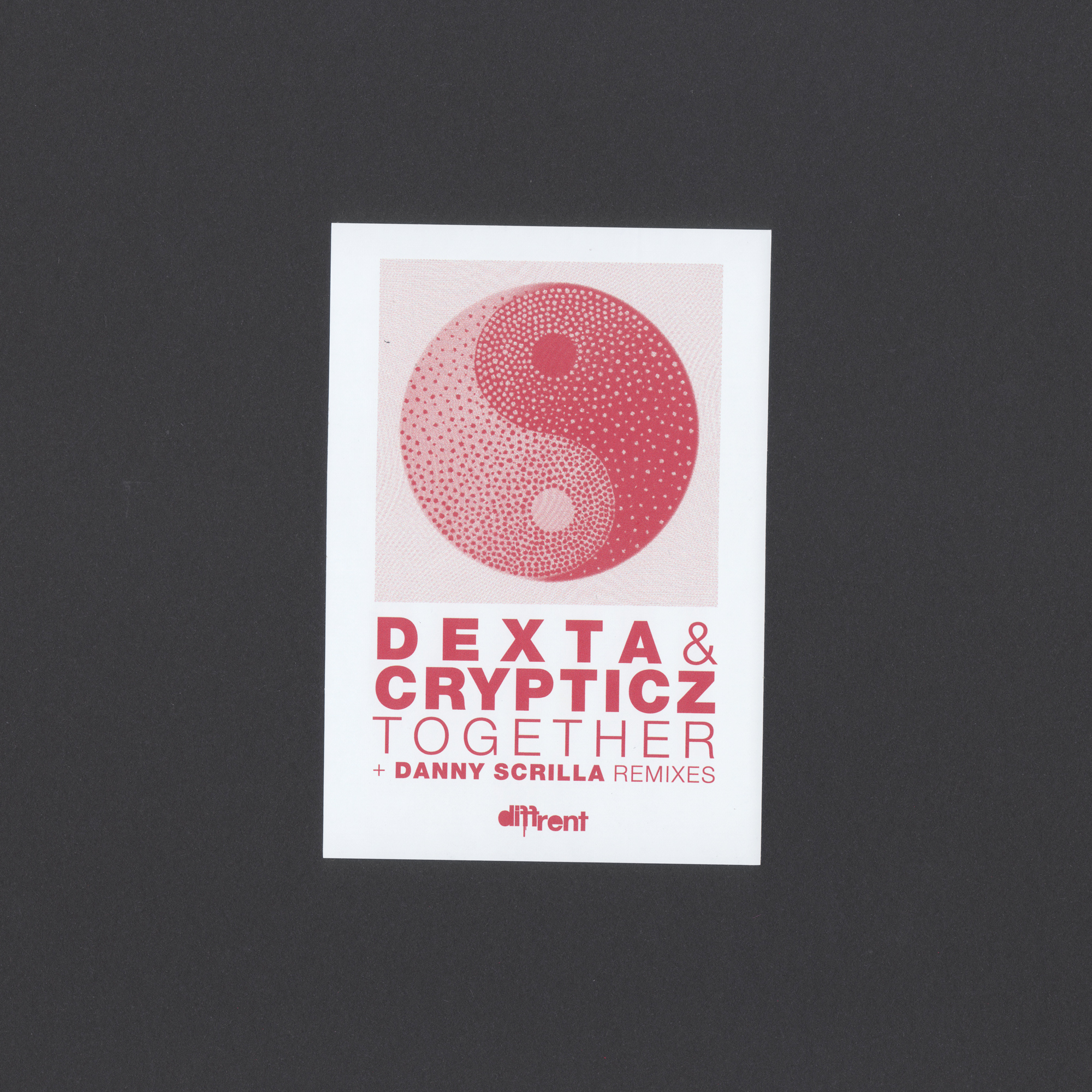 “Dexta and Crypticz are delighted to announce their long awaited 12” single, ‘Together’, featuring two remixes from Munich-based Danny Scrilla. Two years in the making, the project will finally see the light of day on 10th November 2017 via Diffrent Music.

A fusion of Drum & Bass, Jungle, House and Garage, ‘Together’ is built for the dancefloor. The track borrows vocals and breaks from the early ‘90s, while blending drum machines, bass samples and vintage effect processes crafted by Dexta & Crypticz.

Danny Scrilla debuts on the label with a pair of remixes. The ‘Reslice’, is a great example of signature Scrilla, manipulating the original parts into an exploration of dubby, half time soundsystem music. His ‘Reflop’, meanwhile, is a 140bpm re-think, splicing chopped up breaks and bass stabs from the original along with strong percussion lines and weird vocal edits.

Since his outing on Hospital Records in 2015, and his debut ‘SE4 EP’ on Diffrent Music last year, Dexta – otherwise known as Londoner Chris Royle – has released the third part in an ongoing series for None60 Recordings, honing tracks for dancefloors and stereos alike.

Somerset’s Crypticz (aka Jordan Parsons) has had quite an eventful 12 months, with his ‘Echo Sound EP’ on Doc Scott’s 31 Recordings, and more recently the ‘Forever EP’ Om Unit’s Cosmic Bridge imprint, while evolving his club performance from a DJ set to a custom live show consisting solely of his own music and explorations in sound design. This single comes two weeks after his latest release, the ‘Access You EP’, also on Diffent Music, which set a new benchmark for Jordan, refining his sound to its highest quality.

Danny Scrilla (born Daniel Pirkl) has gone from strength to strength this year, dropping a cassette tape project on Cosmic Bridge, compiled of 16 synth and hardware-led experiments. Last month Dan also released a collaborative 12” with Sam Binga called ‘Weird In Munich’ – a superb effort, pushing boundaries from both their usual styles – before putting out an EP for Amit’s AMAR imprint in early September.

‘Together’ will be available as a limited 300 run of 180gsm coloured 12” vinyl, and will be officially released on 10th November 2017. An exclusive small batch will be available at the Clashmouth D&B Label Market on 28th October 2017 at Cafe 1001 on London’s Brick Lane.